We started this expansion pack because we believe Civilization is a fantastic game, and we want to perfect it while remaining as close to the core experience as possible.

We think games should be intuitive to learn, challenging to master, and rewards should match the difficulty to complete tasks. We believe in finding balance between extremes. We set a high bar for adding new things to the game, and instead improve or replace existing objects when possible.

WE strongly believe in finding balanced middle ground between extremes. Imbalanced games with one dominant strategy (like Tic-Tac-Toe) rarely keep our interest past childhood, while balanced games with many strategies (like Go and Chess) can challenge humanity for thousands of years. 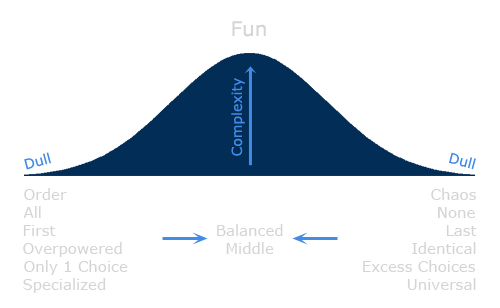 This shows some extremes we can find a middle ground between. We compare one or more pairs of extremities when making decisions, like always/never or specialized/universal.

If we always or never do something, there is no choice involved. The middle involves more challenging and complex decisions than the ends. In simple games, we reach a plateau where further experience does not make us better at the game. There is little reason to continue once we master simple games. Complex games let us discover new strategies as we gain experience at the game, increasing replayability, which extends the time we can have fun at the game. Complexity is greatest between the extremes.

Very early in the project we added local resource bonuses on the Granary. It originally had a "universal" bonus of 2 in any city. We added a "specialized" +1 food bonus for specific nearby resources. This brought the granary closer to the "mixed" center of the scale. This was one of the first big successes of the project. It was received so well, Firaxis added this concept to granaries in the core vanilla game, so we continued refining this process.

Another example is we created the combined research system for Research Agreements. If our research partner has double our science rate, we get double reward from the RA, and vice versa. This makes the game more challenging when ahead of the AI. Close games in Civ & sports are more exciting. It keeps people interested in continuing the game all the way to the end. The vanilla reward-the-leader approach made the game easier when ahead, or harder when behind, which encourages people to leave once victory or defeat is assured.

We often follow the principle of the 80/20 rule. Objects like units or policies should be somewhat useful for most people (universal side of scale), and mostly useful for some peopole (specialized side).

Removing choices from the game makes it less complex, challenging, and fun. We kept several choices the vanilla game removed, including the list below. We prefer to balance choices when possible, instead of simplifying the game by removing choices.

We believe the Civ 5 interface should be intuitive to understand, for both players and modders. This is the focus of the Civilization V Unofficial Patch (Civup). It means presenting information and tools in a clear, easy to use, and meaningful way.

This also involves making the code easier to read and use for modders behind the scenes. These enhancements to the underpinnings of the game unlock potential to increase the fun of game decisions, creating a positive cycle between interface and game design goals.

How we do this

Community content is available under CC-BY-SA unless otherwise noted.